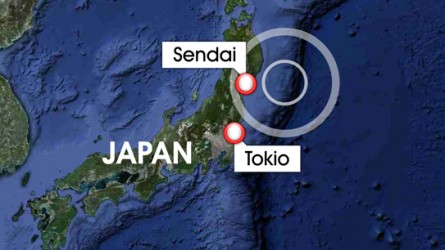 A series of powerful earthquakes struck northeast Japan on Friday afternoon March 11, 2011. The first earthquake struck 2:46 pm local time and measured magnitude 9.0. It struck at a depth of six miles (10km) about 80 miles (128 km) off the eastern coast. A Tsunami of more than 15 m hit the Japanese northeast coast and swept away buildings, ships, vehicles, and farmland. The quakes and tsunami killed life-lines (electricity, waterworks, and gas facilities) in six prefectures (Aomori, Iwate, Miyagi, Fukushima, Ibaraki, and Chiba) and collapsed civil life in those areas. The death toll is more than 13 000 as of April 11, and the missing is more than 14 000 people. The amount of damage caused by the quakes and tsunami was estimated to be more than 25 trillion Yen (0,21 trillion €) (in comparison, the budget of the Japanese government is less than 80 trillion). More than 15 thousand people are evacuating far from their homes now. Quakes beyond magnitude 6.0 are frequently occurring in those areas now.

Besides the direct damage of the quakes and tsunami, much radioactive iodine continues to leak from Fukushima Daiichi nuclear power plants. The cooling systems for the power plants are not working because they were damaged by the quakes and tsunami. Almost all nuclear specialists in Japan try to overcome a series of nuclear accidents. However, there is no telling when the nuclear incidents are over. Japanese officials announced that they raised the event level of the Fukushima Daiichi nuclear power plant to the maximum level of 7 (INES scale; International Nuclear and Radiological Event Scale), the highest on the international scale for nuclear incidents and the same level assigned to the 1986 disaster at Chernobyl in Ukraine. The radioactive substances are falling onto cities and agricultural lands surrounding the damaged nuclear power stations. People evacuating from the quakes and tsunami continue to move to safer distances from the Fukushima Daiichi nuclear power plant. Some nuclear specialists say that it will take more than twenty years for recovery from the nuclear incidents.

Ministry of Agriculture, Forestry and Fisheries in Japan roughly calculated the loss caused by the quake and tsunami, and reported that the loss is more than 85 hundred million US dollars for the agriculture sector only(1 $=100). Northeast Japan has about 20 % of all the farmland in Japan. Damaged farmland is estimated to be more than 23,600 ha and it is about 2.6 % of all farmland in northeast Japan. However, the loss calculation does not involve the cost of recovery from salty farmlands. Thus, the loss will become greater.
Radiation caused by the nuclear incident seems to be polluting not only farmlands but also agricultural products cultivated around the Fukushima Daiichi nuclear power plants. The Japanese government enforces an inspection to find and destroy agricultural products containing radioactive substances. However, even though the radioactive substances are not detected, many people hesitate to buy the products cultivated around the Fukushima Daiichi nuclear power plants. The Japanese government also instructs farmers to delay planting in this season around the area. No one knows the way to restore radioactive polluted farmland. No one knows when farmers can start to cultivate around these areas.

Rumors of radioactive pollution are sometimes very serious. March 24, a cabbage farmer in Fukushima killed himself. The day before, Japanese officials said that cabbages cultivated in the Fukushima area contained low level radiation. They also said that consumers should be careful not to eat these cabbages. The reason for the suicide of the cabbage farmer seems to be the gloomy future for the area. Now, Japanese officials stop many agricultural products from shipping because they have a possibility of radioactive pollution by the nuclear incidents. Many countries have also stopped importing many Japanese products because they have a possibility of radioactive pollution no matter where they are produced.

Kagome Onahama tomato greenhouse, which is a very important customer for Tokai Trading Co, Ltd., was also damaged by the quake. The greenhouse cultivates tomato plant year round in 10.5 ha using BIOBEST bumblebees and natural enemies. Fortunately, no employees were injured by the quake. But some of them lost their home.@The quakes broke much greenhouse glass and it collapsed.@Power cuts caused by the quake killed electric water flow systems and the fertilizer supply system.

Under such catastrophic conditions, the president of the Onahama and his colleagues stay overnight in the damaged greenhouse and keep cultivation going. Because the electricity is not stable Onahama workers are watering by hand and continue to cultivate tomato plants.@They decided to continue to cultivate one fourth of the total greenhouse and decided to give-up on three quarters of the greenhouse. Many delivery companies are damaged and are not recovered yet. Some agents in Tokai Trading Co. Ltd. transported bumblebee hives and some relief over 200km. We, Tokai Trading Co. Ltd. will support them as far as we can.

We cannot imagine the end of these catastrophic situations for both the quakes and the nuclear incidents. But we continue to send BIOBEST bumblebees to our customers as long as the farmers do not give up tomato cultivation. We want everybody to know that Japanese farmers do not give up under such catastrophic situations and that Japanese farmers will continue to grow for tomorrow.