The best solution against whitefly 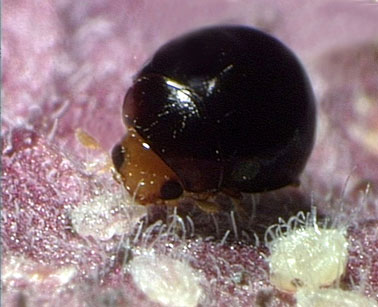 Big infestations of whiteflies are difficult to control with parasitic wasps only. In certain crops the grower can count on the beetle Delphastus pusillus, which wipes out whitefly hot spots efficiently.
Larvar as well as adults suck plant juices. Secretion of honeydew fouls the leaves and the fruits, which become not marketable. Often moulds grow on the honeydew, which stunts photosynthesis and respiration of the plant. Moreover, whiteflies can transmit several viruses.

Delphastus catalinae is a small ladybird beetle which feeds on all stages of whitefly, but prefers whitefly eggs and larvae. Adult beetles are small, shiny, dark brown to black and 1.3 to 1.4 mm long. Females have a reddish yellow head and are lighter coloured than males.

Adult beetles are active flyers that are attracted to the smell secreted by young whiteflies.
The development time of D. catalinae is strongly influenced by temperature and light. The complete life cycle takes 21 to 25 days at 25 to 30°C. The optimal temperature for D. catalinae is situated between 16 and 35°C; at temperatures below 13°C Delphastus does not fly. It does not go in diapause under short-day circumstances and is therefore active during the entire season.
Both larvae and adults are excellent predators that can consume numerous eggs and larvae each day. An adult beetle devours daily up to 160 eggs or 12 whitefly larvae. A larva eats about 1,000 whitefly eggs during its entire development (or less if it also eats whitefly larvae). A single Delphastus can consume 10,000 whitefly eggs or 700 larvae during its lifetime!

Introduce D. catalinae after whiteflies have been detected, preferably in hot spots (50 to 100 eggs/m2).

• Release minimum 30 to 100 beetles per hot spot/week, or 10 beetles per plant/week, for a period of at least 3 weeks or until a population is established.