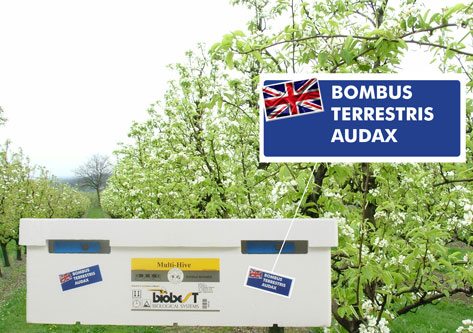 Responding to the needs of UK outdoor soft fruit growers and conservationists, Biobest started producing the native British bumblebee, Bombus terrestris audax for outdoor pollination one year ago.
Untill then, commercially reared bumblebee hives were a subspecies of the mainland Bombus terrestris. Previously, commercially sold bumblebees were not native to the UK their use was restricted to glasshouse cultures and high tunnels. In field crops, such as strawberries, raspberries and currants, UK growers were unable to deploy these great pollinators. That put them at a disadvantage relative to their foreign competitors.

A recent study by Lye et al. (2011) suggests that the Biobest strategy to launch Bombus terrestris audax is the optimal solution for UK growers to be competitive with their European colleagues. The study examined the effect of commercially reared bumblebees Bombus terrestris on raspberry yields as well as the potential competitive interactions of these colonies with the natural pollinator communities foraging on raspberry. No apparent effect of the commercial bumblebees was found in the abundance, diversity, or composition of social bee species observed visiting raspberry flowers. Moreover, the weight of marketable raspberries increased when commercial bees were present. Nevertheless, the results suggest that between 90 and 93% of total yield is achieved in the absence of commercial bumblebee colonies, suggesting that the contribution by native pollinators is likely to be high. According to the authors, alternative solutions – those that minimize the potential environmental risks associated with the importation of non-native bumblebees- such as the use of the newly available Bombus terrestris audax can compensate the deficit in raspberry crops in the United Kingdom.

Biobest was the first successful company to rear the native British Bombus terrestris audax. They were commercially launched in the summer of 2010 and are available through Biobest’s UK distributor Agralan.
Bumblebees are effective pollinators. They fly early in the season and on days when it is far too cold and dark for honeybees and other pollinators. They ‘buzz’ or shake the flower to collect pollen, further enhancing pollination in different crops.

So when you are enjoying your British berries this summer, chances are that they might just be that little bit more British.

Now standard on all our hives.

As announced earlier at the Fruit Logistica in Berlin, the new Biobest ventilation hive will be available as of mid-March.
This product improvement came at the request of our customers from the Mediterranean region, where the midday heat puts the bumblebees to sleep. To maintain high and continuous activity of our bees, our new hives are equipped with a sophisticated and well-designed ventilation system. After thorough testing of this new hive, we can say with certainty that we can offer you an improved hive which guarantees the quality of your Biobest bumblebees in all climatic conditions.