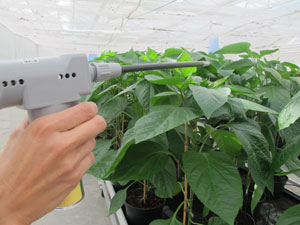 In many crops, predatory mites are the cornerstone of the biological control strategy. Predatory mites such as Amblyseius swirskii, A. cucumeris and A. californicus are widely used to control pests like thrips, whitefly and spider mite. Nevertheless, there are situations – often linked to a lack of food supply - in which these beneficials struggle or even fail to establish in the crop. This is a serious bottleneck to the success of biological pest control in a range of (ornamental) crops and plant nurseries. Biobest now has the solution: Nutrimite™, a plant-based food supplement (pollen), gives a solid boost to hungry predatory mite populations.


You rightfully count on Biobest to provide predatory mites that are ready to go hunting for a myriad of nasty bugs. Finding a juicy prey from time to time is what keeps them going. Biological pest control generally works well in crops in which a certain level of presence of the pest can be tolerated. However, in ornamental crops, the economic damage-threshold is usually very low. In fact, it is so low that there is too little prey to keep your hunting allies alive and kicking. Absence of prey food can be compensated, as most predators also have a vegetarian side to their menu. In flowering crops with sufficient pollen (e.g. pepper), the pollen and nectar generally serve as a good alternative diet on which the predatory mites can survive and develop well. The most challenging situations for the use of predatory mites thus occur when there is neither sufficient prey nor pollen available.


In collaboration with a number of researchers, Biobest has now developed a simple, efficient and innovative technique to solve this problem: just apply Nutrimite™ pollen as a healthy snack for your predatory mites and watch their populations prosper. It is flower power in a bottle!

Results published in scientific journals as well as in-house tests in the Biobest Greenlab show spectacular effects: up to three times more predatory mites when Nutrimite™ is applied on the crop. This innovative strategy is now being extensively tested in collaboration with commercial growers. The goal is to develop specific release schemes, ensuring a more efficient introduction and long-term establishment of predatory mite populations, for a range of target crops. “Less is more” is the motto: Nutrimite™ will enable you to achieve a larger and healthier predatory mite population delivering better results with fewer releases and limited release rates.


Nutrimite™ is based on a natural pollen-type which has been selected on its particular characteristics. It is relatively resistant to mould; once applied on the crop, the pollen remains a suitable food for two weeks. It is highly attractive and nutritionally balanced for predatory mites, while being relatively unsuitable for thrips.


Biobest will keep you informed about the results of the current demonstration trials. Based on the extensive available data, we are confident that Nutrimite™ will help to extend the many benefits of biocontrol to traditionally “difficult” crops. Growers are enthusiastic as well. Therefore we have decided to already make limited quantities of Nutrimite™ available for commercial use. If you want to get a taste of the benefits the Nutrimite™ concept can deliver, contact your Biobest rep or distributor.