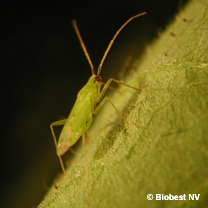 Macrolophus pygmaeus is an excellent predator of whitefly. Thanks to its polyphagous nature, it also feeds on moth eggs and spider mites, among others. Unfortunately, this predatory bug sometimes builds up its population relatively slowly. It is therefore advisable, especially in the spring, to dedicate attention to it, as otherwise it may later lead to difficult situations.

Macrolophus pygmaeus is the most important and efficient predator of whitefly. This predatory bug is very effective, but needs time, especially in the spring, to build up a strong population. To accelerate that build-up, Biobest advises to supplement its feed with Nutrimac (sterile eggs of Ephestia kuehniella). Nutrimac has a very favourable and especially accelerating effect on the population build-up. It is, therefore, of paramount importance to limit leaf picking at the expansion sites of Macrolophus to a minimum of 8 weeks. This gives the opportunity to the hatched nymphs to crawl to the top of the plant in the early spring. Macrolophus is given supplementary feed in the form Nutrimac at a dose of 10 g / ha / week for a minimum of 7 weeks. During the first 4 weeks, Nutrimac is dispersed in the expansion centres of Macrolophus. This provides good feed to individuals of the first population cycle. Then Nutrimac is applied in rows at 50 g / ha / week so that the predatory bugs could spread and multiply further with optimal effect. This standard advice can also apply to Nesidiocoris tenuis that is frequently spread in the Mediterranean countries.

In the first months, it is important to sufficiently support the introduction of Macrolophus with parasitic wasps. Encarsia formosa and Eretmocerus spp. form, in their turn, the basis for the control of whitefly later in the spring.